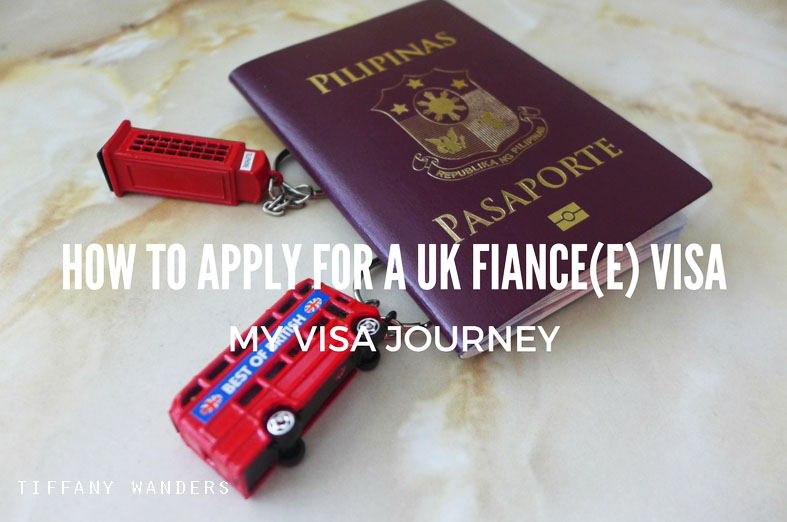 Research and perseverance were the keys to achieving my fiance(e) visa without the help of a solicitor. The main aspects that the ECO wants you and your sponsor to meet are financial, accommodation and evidence of a genuine relationship.

After doing some digging on the internet, we finally made a list of the required documents. It wasn’t easy as I live in Davao City and I have to go to Manila to do the IELTS Lifeskills test and TB test (office only in Manila). I booked both tests in one day as my work responsibilities don’t allow me to have a long absence. So, time is gold and I have to make sure that I complete them all in one go.

For settlement visas, a TB test is required before entering the UK. This test can only be done in International Organisation for Migration Health Centre (IOM Manila) in Makati City. I emailed their office first to book an appointment and after an hour, I received a reply saying I need to fill-out the required information. 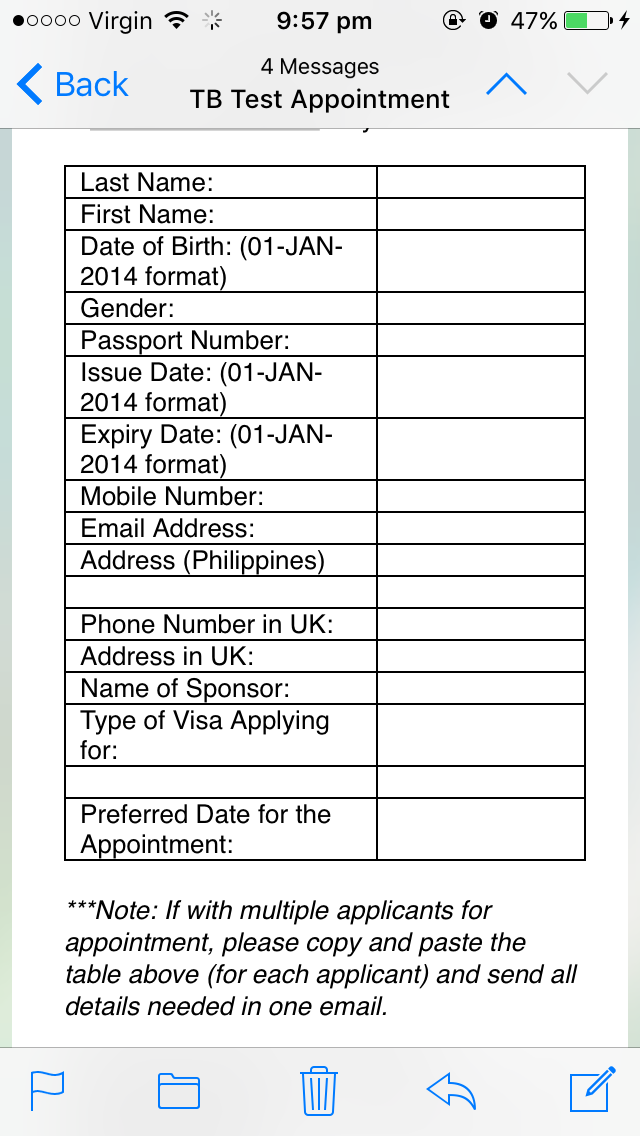 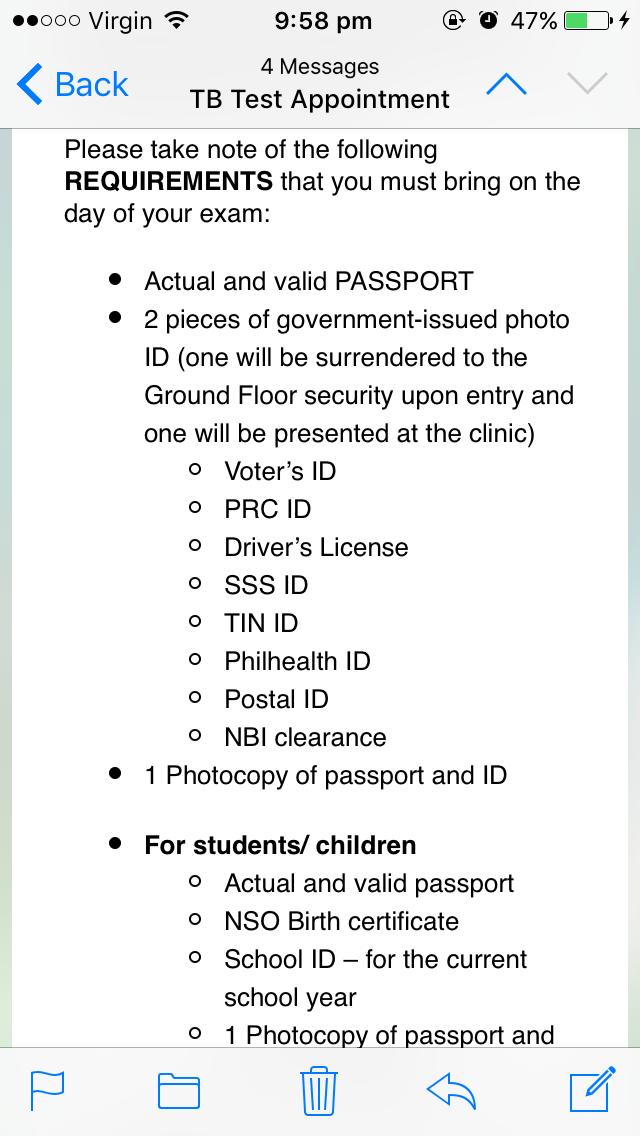 After completing the table, I sent an email back. A day after, I received a confirmation email that my appointment has been booked. 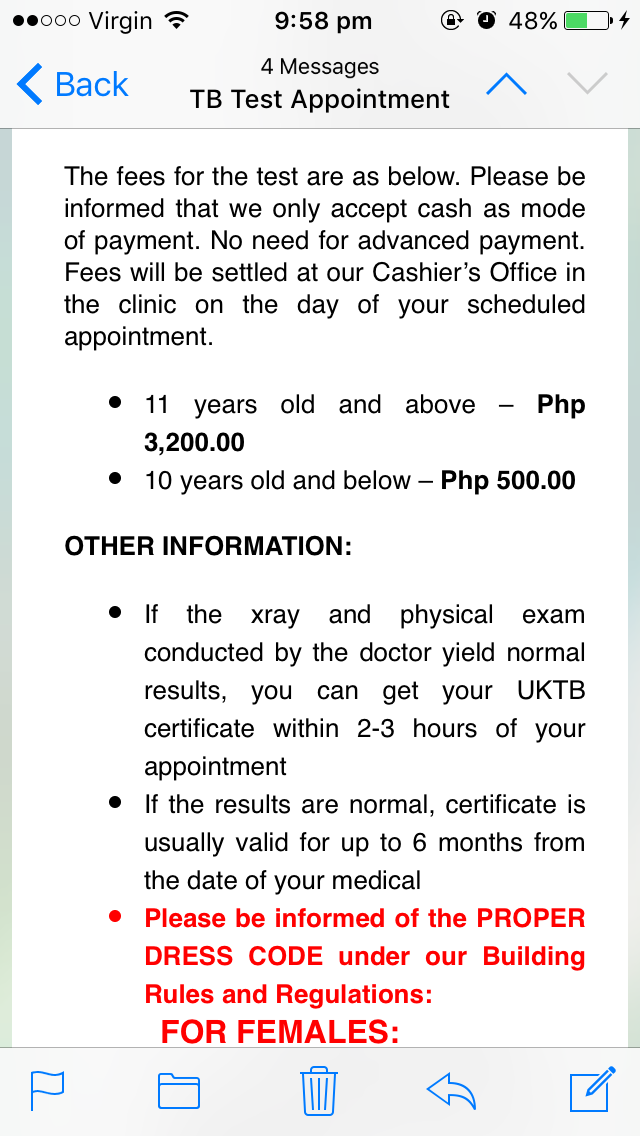 The fee I paid was PHP3,200 (as of September 2016) in their office on the day of my appointment. I’m not sure if there are changes this year.

Around 7:00 AM of September 8, I took a cab from Saint Illian’s Inn in Makati to Trafalgar Plaza. The fee I paid was PHP80. I arrived in IOM office 10 minutes before 8:00 AM and I was surprised that there were already a lot of patients in. 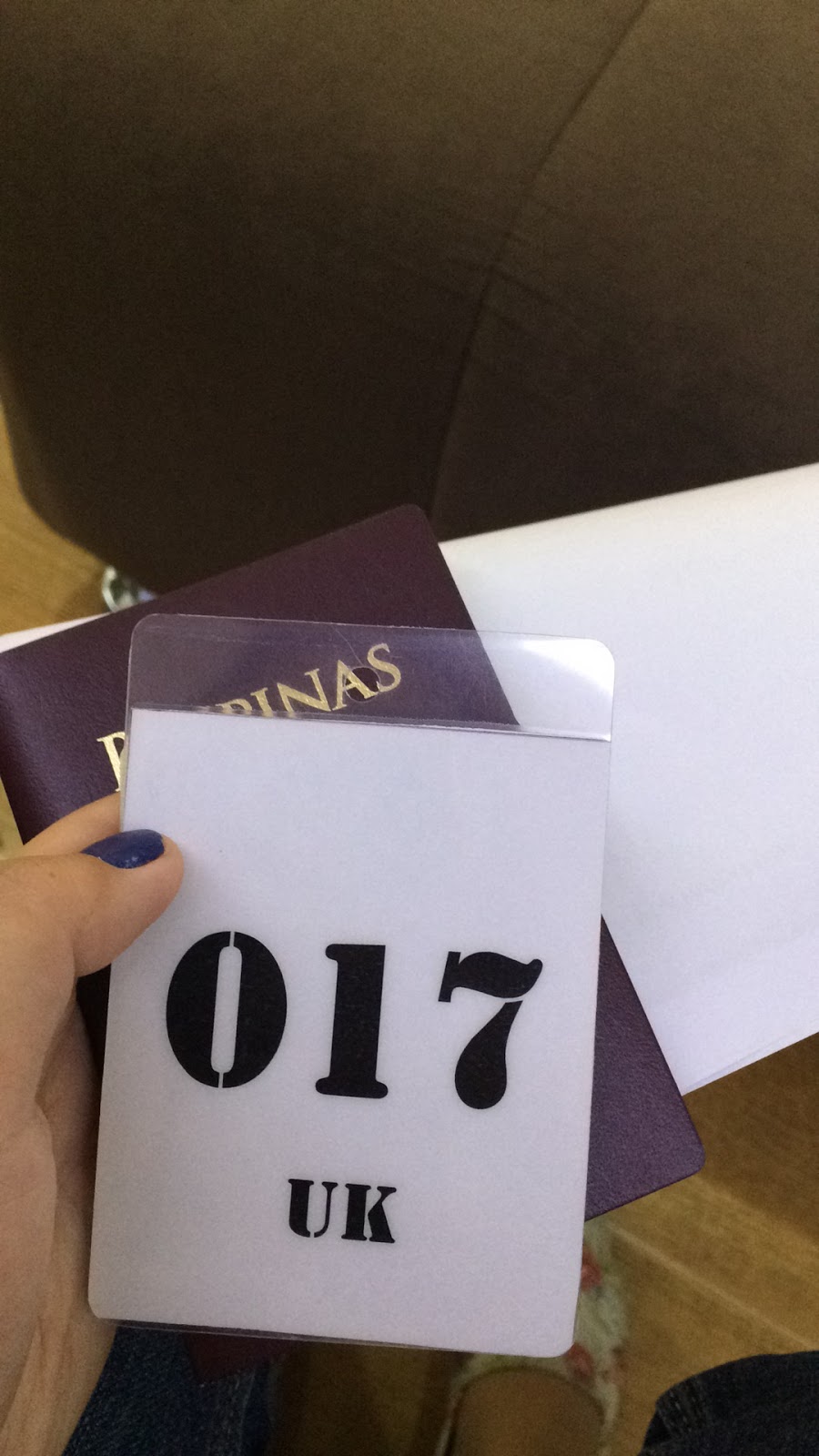 Tip: Bring 2 valid IDs for the security guard in the main entrance and another one in IOM office. They will ask for it before you can enter. After giving my ID to the guard in the IOM entrance, he gave me a priority number. 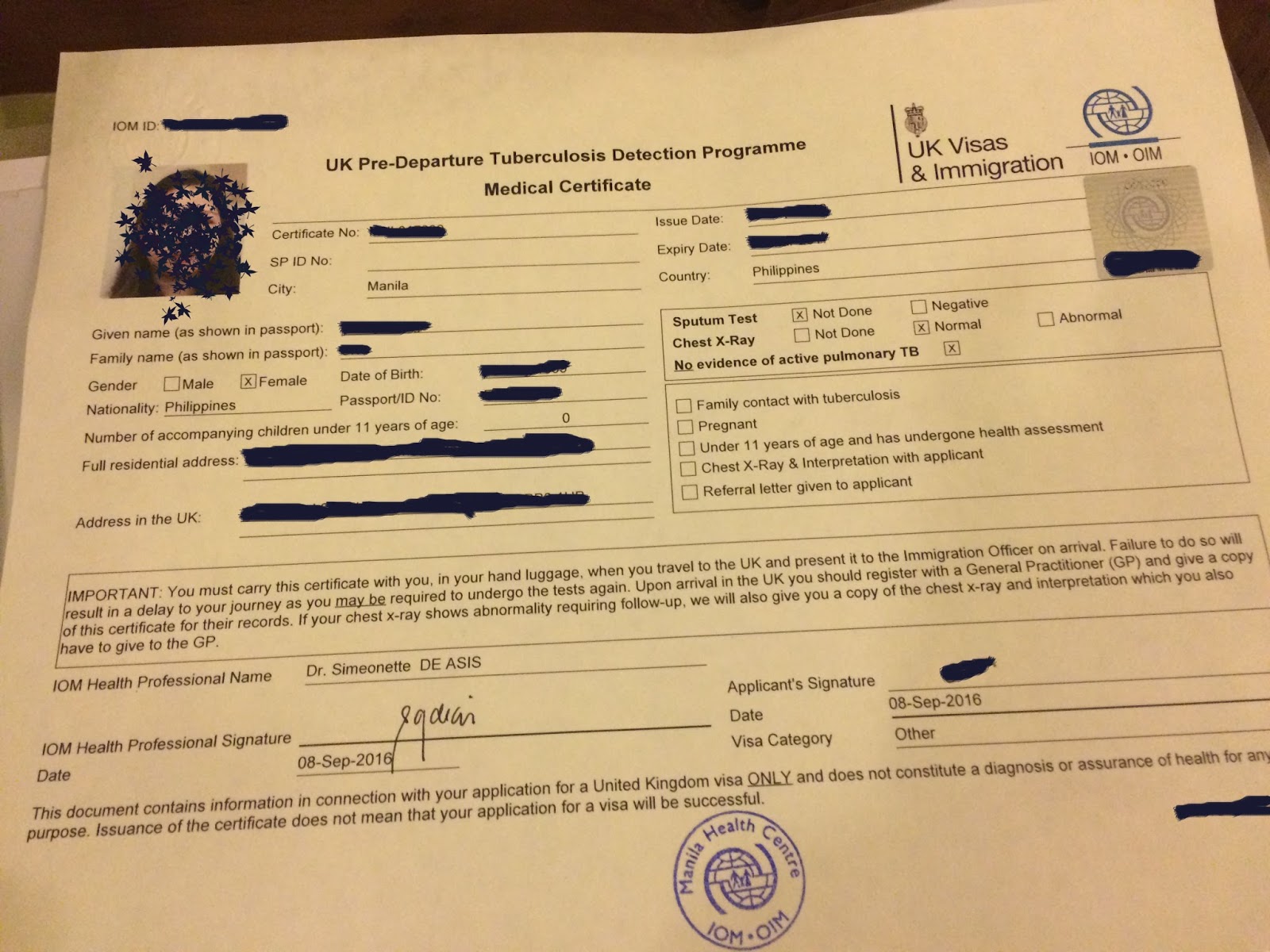 By 9:30 AM, I received my TB test certificate. It was negative. I was so happy as it means I don’t have a TB and one step further to finish this process. I then rushed to Marco Polo Ortigas for my IELTS exam which was scheduled for 1:30 PM.

It is a requirement to take an IELTS Lifeskills test (for non-English-speaking countries) to prove that the applicant can speak and understand English. We all know that a lot of Filipinos can speak and comprehend well in English as this language is taught since pre-school and all the way to college.

I booked the Lifeskills A1 test and paid PHP10,415 online via the IDP website. I then received a confirmation email. 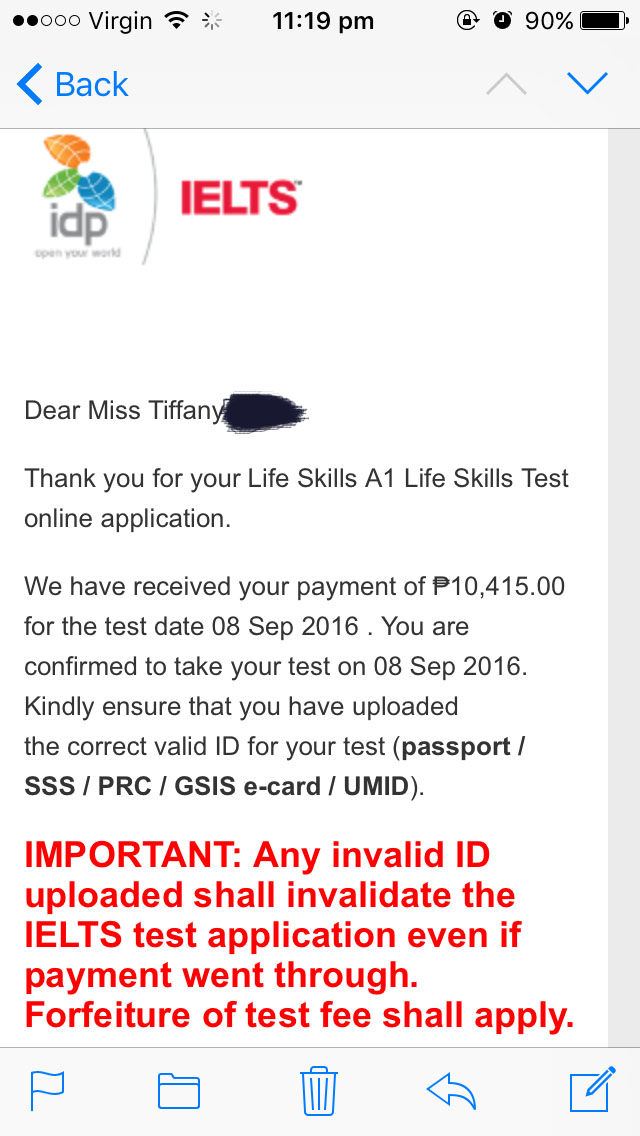 After my TB test appointment in Makati City, I took a cab to MRT Buendia to catch the train. I thought it’s cheaper because I only paid PHP16 and much faster (avoid traffic). I got off SM. Since there was still enough time, I took my lunch and strolled for a bit. Around 12:50 PM, I took a cab going to Marco Polo Ortigas. I arrived in the hotel around 1:00 PM and then I went straight to IELTS office. Some applicants were already there waiting for their tests.

When it was nearly my time, I was feeling nervous! But I can say and let me assure this to people who are just about to get their Lifeskills tests — It’s just like a walk in the park! It was easy. In my experience, there were 3 parts. The 1st and 3rd parts were conversations and the 2nd part was listening.

After the exam, they gave me my receipt. I have to wait for a few days to view my result online. After 9 days, my IELTS certificate was delivered to my home address.

I did all tests in ONE day. It was possible after all. 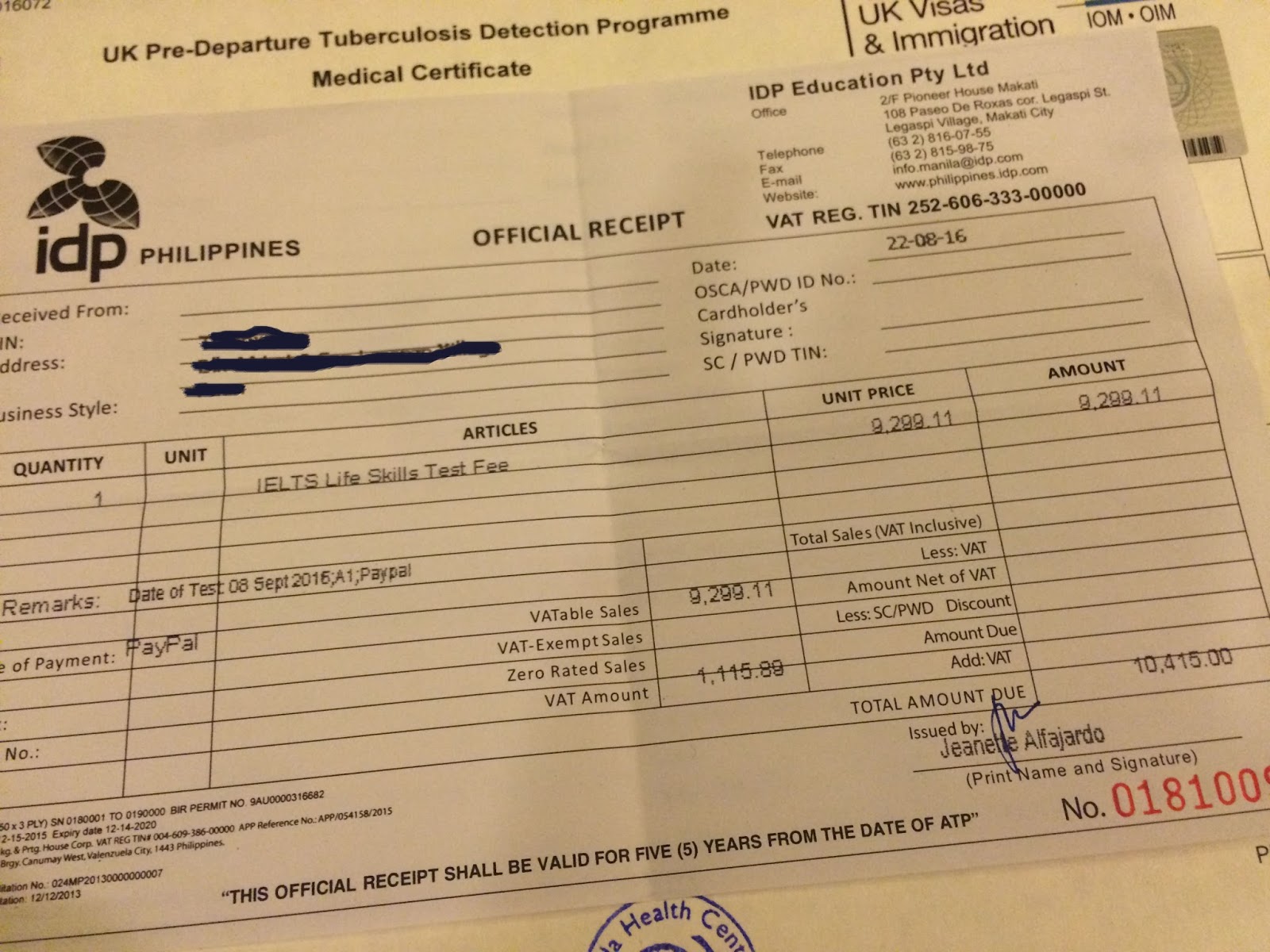 END_OF_DOCUMENT_TOKEN_TO_BE_REPLACED

Five Years of Living in …